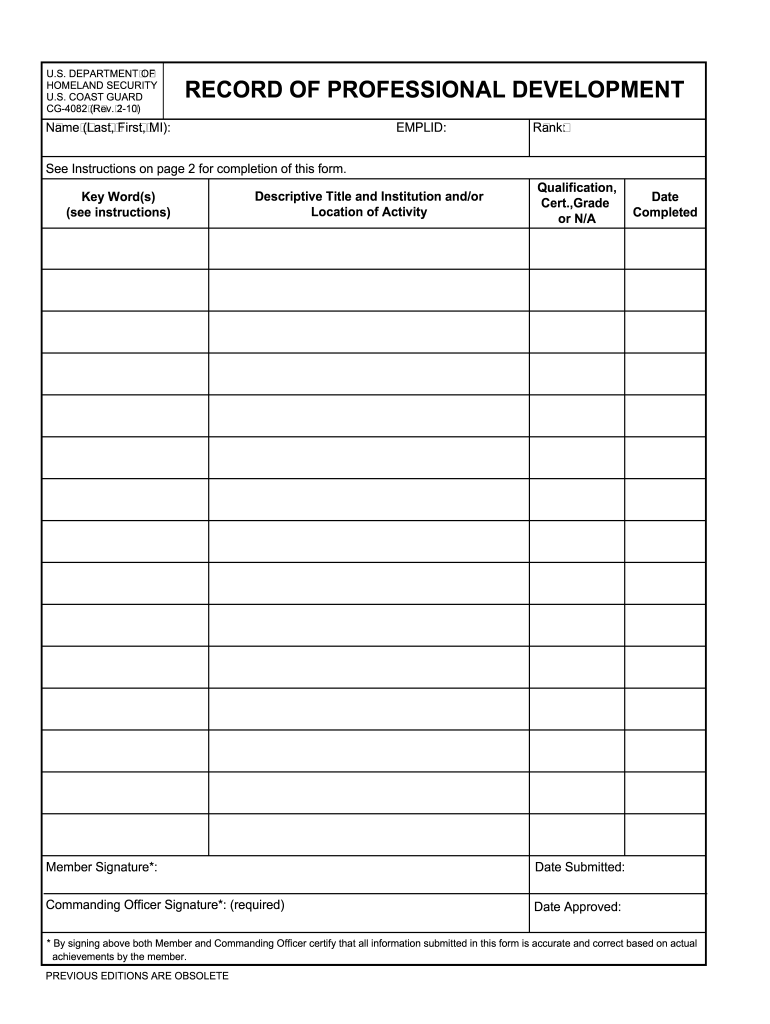 Use the cg 4082 2010 template to simplify high-volume document management.

U.S. DEPARTMENT OF HOMELAND SECURITY U.S. COAST GUARD CG-4082 Rev. 2-10 RECORD OF PROFESSIONAL DEVELOPMENT Name Last First MI EMPLID Rank See Instructions on page 2 for completion of this form. Key Word s Descriptive Title and Institution and/or Location of Activity Qualification Cert. Only one signed original is needed. Signature approval from the commanding officer is required. 2. Only official transcripts or certified copies of transcripts will be accepted. No other attachments are...
Show details

Quick guide on how to complete coast guard form

signNow's web-based service is specifically designed to simplify the organization of workflow and improve the entire process of proficient document management. Use this step-by-step guideline to complete the RECORD OF PROFESSIONAL DEVELOPMENT — U.S. Coast Guard — USCG form promptly and with excellent accuracy.

How you can fill out the RECORD OF PROFESSIONAL DEVELOPMENT — U.S. Coast Guard — USCG form on the internet:

By utilizing signNow's comprehensive solution, you're able to perform any needed edits to RECORD OF PROFESSIONAL DEVELOPMENT — U.S. Coast Guard — USCG form, create your personalized digital signature within a few quick actions, and streamline your workflow without the need of leaving your browser.

How do i obtain my coast guard record of professional development

Let's go through the disclosure statement for narcotics DWI Dy and/or other convictions who should submit this form what it comes down to is you will need this form if you answer yes to any of the questions in section 3 of the application I'm going to bounce to that application rEvally quick click up here in my tab here is section three safety and suitability see these questions labeled ABIDE if you answer yes to any of these the most common one we get is a DUI where is that one yeah have you ever been convicted of a traffic infraction arising connect with fatal car accident reckless driving or racing on the highway or under the influence of or impaired by alcohol or controlled subjects if you have to answer yes to any of those, but that's the most common one you must include a disclosure statement, so it's anyone who's been convicted and what does it mean to be convicted it means that they plead guilty plead no contest your granted deferred education is required to attain attend class

4082 coast guard design cg 4082? signNow combines ease of use, affordability and security in one online tool, all without forcing extra DDD on you. All you need is smooth internet connection and a device to work on.

Follow the step-by-step instructions below to design your cg 4082 record of professional development:

After that, your coast guard 4082 is ready. All you have to do is download it or send it via email. signNow makes signing easier and more convenient since it provides users with a number of additional features like Merge Documents, Add Fields, Invite to Sign, and many others. And due to its cross-platform nature, signNow works well on any device, personal computer or smartphone, regardless of the OS.

4082 coast guardpopularity due to its number of useful features, extensions and integrations. For instance, browser extensions make it possible to keep all the tools you need a click away. With the collaboration between signNow and Chrome, easily find its extension in the Web Store and use it to design cg 4082 right in your browser.

The guidelines below will help you create an signature for signing cg 4082 record of professional development in Chrome:

Once you’ve finished signing your coast guard 4082, decide what you want to do after that — download it or share the doc with other parties involved. The signNow extension offers you a variety of features (merging PDFs, adding several signers, and many others) for a much better signing experience.

4082 coast guardone paperless, the majority of are sent through email. That goes for agreements and contracts, tax forms and almost any other document that requires a signature. The question arises ‘How can I design the cg 4082 I received right from my Gmail without any third-party platforms? ’ The answer is simple — use the signNow Chrome extension.

Below are five simple steps to get your cg 4082 record of professional development designed without leaving your Gmail account:

The signNow extension was developed to help busy people like you to reduce the burden of signing papers. Start signing coast guard 4082 by means of tool and become one of the millions of happy users who’ve previously experienced the benefits of in-mail signing.

4082 coast guardesktop and laptop computers. You can take them everywhere and even use them while on the go as long as you have a stable connection to the internet. Therefore, the signNow web application is a must-have for completing and signing cg 4082 on the go. In a matter of seconds, receive an electronic document with a legally-binding signature.

Get cg 4082 record of professional development signed right from your smartphone using these six tips:

The whole procedure can take less than a minute. You can download the signed [Form] to your device or share it with other parties involved with a link or by email, as a result. Due to its cross-platform nature, signNow is compatible with any gadget and any operating system. Select our signature solution and leave behind the old times with affordability, security and efficiency.

4082 coast guardsily create electronic signatures for signing a cg 4082 in PDF format. signNow has paid close attention to iOS users and developed an application just for them. To find it, go to the App Store and type signNow in the search field.

To sign a cg 4082 record of professional development right from your iPhone or iPad, just follow these brief guidelines:

After it’s signed it’s up to you on how to export your coast guard 4082: download it to your mobile device, upload it to the cloud or send it to another party via email. The signNow application is just as efficient and powerful as the online app is. Connect to a strong connection to the internet and begin executing documents with a fully legitimate electronic signature within a few minutes.

4082 coast guardrs, the market share of Android gadgets is much bigger. Therefore, signNow offers a separate application for mobiles working on Android. Easily find the app in the Play Market and install it for signing your cg 4082.

In order to add an electronic signature to a cg 4082 record of professional development, follow the step-by-step instructions below:

If you need to share the coast guard 4082 with other parties, it is possible to send it by electronic mail. With signNow, you are able to design as many documents daily as you require at a reasonable price. Begin automating your signature workflows right now.