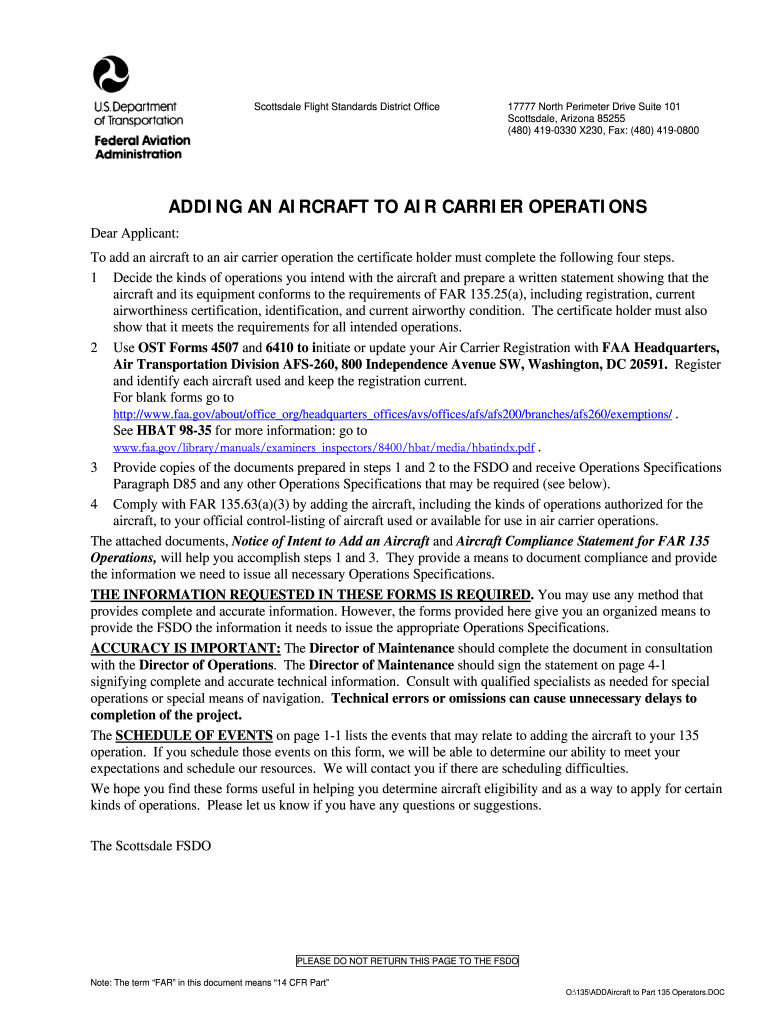 135.25(a), including registration, current airworthiness certification, identification, and current airworthy condition. The certificate holder must also show that it meets the requirements for all intended operations. 2 Use OST Forms 4507 and 6410 to initiate or update your Air Carrier Registration with FAA Headquarters, Air Transportation Division AFS-260, 800 Independence Avenue SW, Washington, DC 20591. Register and identify each aircraft used and keep the registration current. For blank...
Show details

signNow's web-based program is specifically made to simplify the organization of workflow and enhance the whole process of competent document management. Use this step-by-step guide to fill out the Adding an aircraft to air carrier operations Fresno form swiftly and with perfect accuracy.

The way to fill out the Adding an aircraft to air carrier operations Fresno form on the internet:

By using signNow's comprehensive platform, you're able to carry out any required edits to Adding an aircraft to air carrier operations Fresno form, make your customized digital signature in a couple of fast steps, and streamline your workflow without leaving your browser.

Instructions and help about adding an aircraft to air carrier operations

This video was made possible by clear the first 200 people to sign up at clear my calm / Wend over did three free months of speeding through airport security with clear airlines are notoriously difficult businesses to run each and every flight operated is a multi-thousand dollar gamble on whether passengers will buy tickets aside from cost the strongest factor for customers on which flight they will take is often the overall travel time so airlines put enormous effort into properly assembling their puzzle of flights, so they can offer the shortest connection time possible with so many destinations all across the world it's just natural that most routes require connections so airlines need to attract connecting passengers in order to stay in business now most like connections for traditional airlines happen out of their hub airports American Airlines for example has 10 across the United States and every single one of their flights either begins or ends at these airports but not all hubs

Follow the step-by-step instructions below to design you're faa adding operations:

After that, you're adding air operations is ready. All you have to do is download it or send it via email. signNow makes signing easier and more convenient since it provides users with a number of extra features like Add Fields, Invite to Sign, Merge Documents, and many others. And because of its cross-platform nature, signNow can be used on any device, desktop or mobile phone, regardless of the operating system.

air carrier operations 2nd edition pdfpularity due to its number of useful features, extensions and integrations. For instance, browser extensions make it possible to keep all the tools you need a click away. With the collaboration between signNow and Chrome, easily find its extension in the Web Store and use it to design aircraft air carrier operations right in your browser.

The guidelines below will help you create an signature for signing faa adding operations in Chrome:

Once you’ve finished signing your adding air operations, decide what you wish to do next — download it or share the document with other parties involved. The signNow extension provides you with a selection of features (merging PDFs, including several signers, and so on) for a better signing experience.

air carrier operations 2nd edition pdfe paperless, the majority of are sent through email. That goes for agreements and contracts, tax forms and almost any other document that requires a signature. The question arises ‘How can I design the aircraft air carrier operations I received right from my Gmail without any third-party platforms? ’ The answer is simple — use the signNow Chrome extension.

Below are five simple steps to get your faa adding operations designed without leaving your Gmail account:

The signNow extension was developed to help busy people like you to reduce the burden of putting your signature on forms. Begin signing adding air operations with our tool and join the numerous satisfied clients who’ve previously experienced the advantages of in-mail signing.

air carrier operations 2nd edition pdfdesktop and laptop computers. You can take them everywhere and even use them while on the go as long as you have a stable connection to the internet. Therefore, the signNow web application is a must-have for completing and signing aircraft air carrier operations on the go. In a matter of seconds, receive an electronic document with a legally-binding signature.

Get faa adding operations signed right from your smartphone using these six tips:

The whole procedure can take less than a minute. You can download the signed [Form] to your device or share it with other parties involved with a link or by email, as a result. Because of its cross-platform nature, signNow is compatible with any device and any operating system. Use our signature tool and leave behind the old days with efficiency, affordability and security.

air carrier operations 2nd edition pdfly create electronic signatures for signing an aircraft air carrier operations in PDF format. signNow has paid close attention to iOS users and developed an application just for them. To find it, go to the App Store and type signNow in the search field.

To sign an faa adding operations right from your iPhone or iPad, just follow these brief guidelines:

After it’s signed it’s up to you on how to export your adding air operations: download it to your mobile device, upload it to the cloud or send it to another party via email. The signNow application is just as efficient and powerful as the online tool is. Get connected to a strong web connection and start executing forms with a legally-binding electronic signature in minutes.

air carrier operations 2nd edition pdf, the market share of Android gadgets is much bigger. Therefore, signNow offers a separate application for mobiles working on Android. Easily find the app in the Play Market and install it for signing you're aircraft air carrier operations.

In order to add an electronic signature to an faa adding operations, follow the step-by-step instructions below:

If you need to share the adding air operations with other parties, you can send it by email. With signNow, you cane Sign as many files daily as you need at an affordable price. Begin automating your signature workflows today.