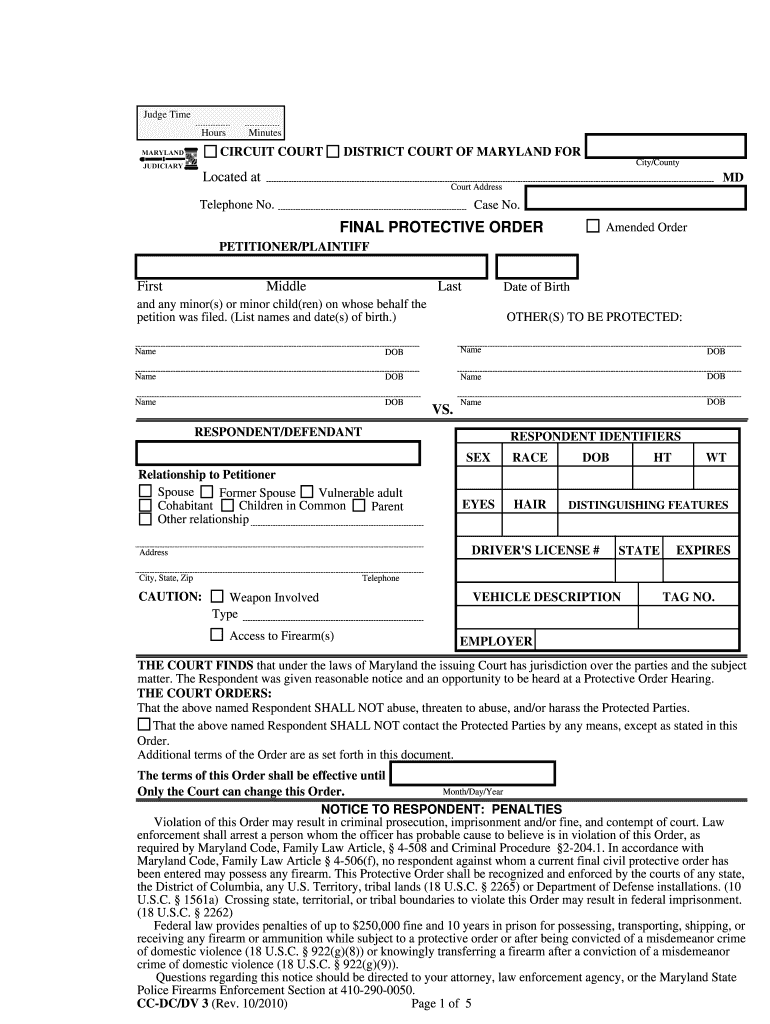 Use a protective order template to make your document workflow more streamlined.

Before the filing of the An individual who has a child ren in common with the Respondent Number of Children and Ages Eligible for extended protection A Final Protective Order was issued against the respondent on behalf of this Petitioner. OTHER S TO BE PROTECTED Name DOB VS. RESPONDENT/DEFENDANT RESPONDENT IDENTIFIERS Relationship to Petitioner Spouse Vulnerable adult Former Spouse Children in Common Cohabitant Parent Other relationship RACE EYES HAIR City State Zip HT WT DISTINGUISHING...
Show details

Rate the restraining order in maryland

Quick guide on how to complete protective order md

signNow's web-based service is specially developed to simplify the arrangement of workflow and improve the entire process of competent document management. Use this step-by-step guideline to fill out the FINAL PROTECTIVE ORDER — Maryland state court system — courts state MD form promptly and with idEval accuracy.

By using signNow's comprehensive platform, you're able to carry out any necessary edits to FINAL PROTECTIVE ORDER — Maryland state court system — courts state MD form, create your personalized digital signature in a couple of quick actions, and streamline your workflow without the need of leaving your browser.

Orders for protection they started out this way what is that that's where a judge for hers somebody to keep away from somebody else, and they can order you to do a bunch of other things that I'll talk about in a minute they started out because when somebody would usually be harassed it was a female asking for one to keep a guy away from them, they could, they made a law that said hey a judge can order somebody to do that without even having a hearing if there's enough evidence from the girl that's accusing the guy of it or vice versa that this harassment is going on what happens there are two ways to get one in Minnesota one is to if you want to get an order for protection the petitioner the person asking for an order for protection can ask a judge for a hearing and go through the courts get a hearing and then present evidence as to why another person's harassing them and whether they want to why they want an order from a judge keeping someone away on the other way to do it is what's c

How to create an eSignature for the maryland restraining order

restraining order in mdective order? signNow combines ease of use, affordability and security in one online tool, all without forcing extra DDD on you. All you need is smooth internet connection and a device to work on.

Follow the step-by-step instructions below to design your maryland state court system:

After that, your restraining order md is ready. All you have to do is download it or send it via email. signNow makes signing easier and more convenient since it provides users with a number of extra features like Add Fields, Merge Documents, Invite to Sign, etc. And because of its cross-platform nature, signNow can be used on any device, PC or mobile phone, irrespective of the operating system.

restraining order in mdue to its number of useful features, extensions and integrations. For instance, browser extensions make it possible to keep all the tools you need a click away. With the collaboration between signNow and Chrome, easily find its extension in the Web Store and use it to design protective order right in your browser.

The guidelines below will help you create an signature for signing maryland state court system in Chrome:

Once you’ve finished signing your restraining order md, decide what you wish to do next — download it or share the document with other people. The signNow extension gives you a variety of features (merging PDFs, including several signers, and so on) to guarantee a better signing experience.

restraining order in mds, the majority of are sent through email. That goes for agreements and contracts, tax forms and almost any other document that requires a signature. The question arises ‘How can I design the protective order I received right from my Gmail without any third-party platforms? ’ The answer is simple — use the signNow Chrome extension.

Below are five simple steps to get your maryland state court system designed without leaving your Gmail account:

restraining order in mdmputers. You can take them everywhere and even use them while on the go as long as you have a stable connection to the internet. Therefore, the signNow web application is a must-have for completing and signing protective order on the go. In a matter of seconds, receive an electronic document with a legally-binding signature.

The whole procedure can take less than a minute. You can download the signed [Form] to your device or share it with other parties involved with a link or by email, as a result. Because of its cross-platform nature, signNow works on any device and any operating system. Select our signature tool and leave behind the old times with security, efficiency and affordability.

restraining order in mdelectronic signatures for signing a protective order in PDF format. signNow has paid close attention to iOS users and developed an application just for them. To find it, go to the App Store and type signNow in the search field.

To sign a maryland state court system right from your iPhone or iPad, just follow these brief guidelines:

After it’s signed it’s up to you on how to export your restraining order md: download it to your mobile device, upload it to the cloud or send it to another party via email. The signNow application is just as efficient and powerful as the online tool is. Get connected to a reliable connection to the internet and start executing documents with a legally-binding electronic signature within minutes.

restraining order in mdet share of Android gadgets is much bigger. Therefore, signNow offers a separate application for mobiles working on Android. Easily find the app in the Play Market and install it for signing your protective order.

In order to add an electronic signature to a maryland state court system, follow the step-by-step instructions below:

If you need to share the restraining order md with other parties, you can send it by email. With signNow, it is possible to design as many documents in a day as you require at an affordable price. Begin automating your signature workflows today.

Find out other maryland protective order