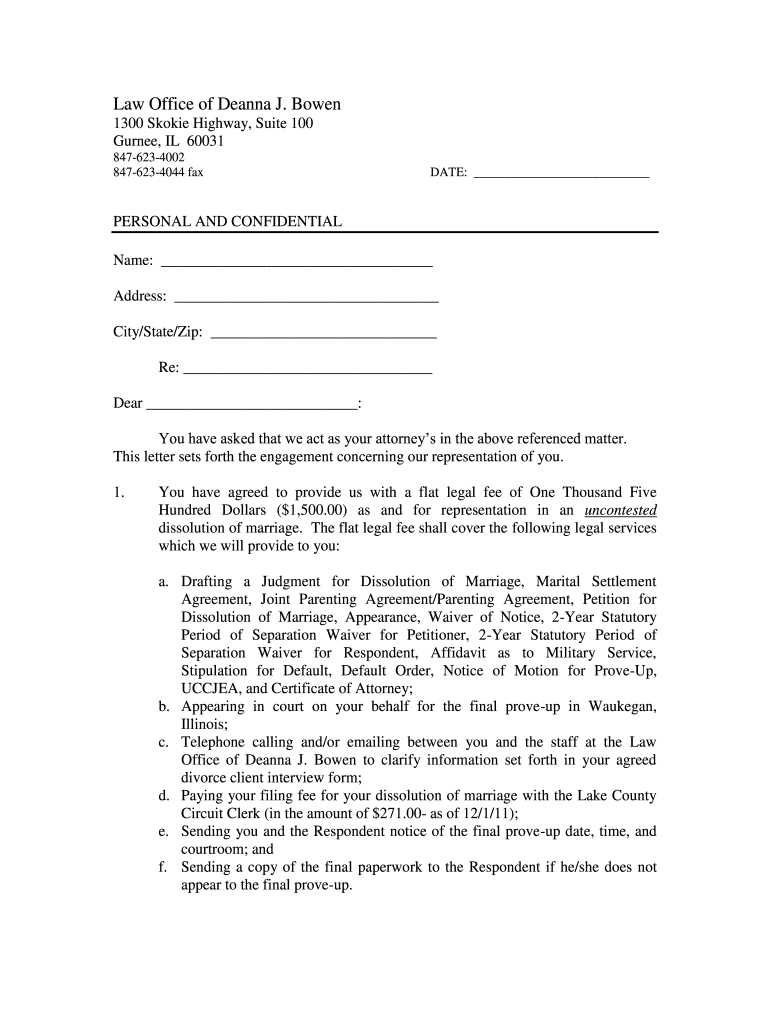 00 for Rebecca McNeill attorney and One Hundred Dollars 100. Law Office of Deanna J. Bowen 1300 Skokie Highway Suite 100 Gurnee IL 60031 847-623-4002 847-623-4044 fax DATE PERSONAL AND CONFIDENTIAL Name Address City/State/Zip Re Dear You have asked that we act as your attorney s in the above referenced matter. Appearing in court on your behalf for the final prove-up in Waukegan Illinois c. Telephone calling and/or emailing between you and the staff at the Law Office of Deanna J. Bowen to...
Show details

Quick guide on how to complete divorce retainer agreement sample

signNow's web-based service is specifically designed to simplify the organization of workflow and improve the process of proficient document management. Use this step-by-step guideline to fill out the AGREED DIVORCE Retainer agreement — Family Law and Divorce ... form swiftly and with excellent accuracy.

How you can fill out the AGREED DIVORCE Retainer agreement — Family Law and Divorce ... form on the internet:

By using signNow's complete solution, you're able to execute any required edits to AGREED DIVORCE Retainer agreement — Family Law and Divorce ... form, create your personalized electronic signature in a few quick actions, and streamline your workflow without leaving your browser.

Music hi guys and — welcome to my channel my name is Deanna Minsky, and I am a family law specialist practicing family law in San Francisco today I would like to talk about how to start your divorce and this is going to be one of the four series videos this video is going to be about how to fill out forms for divorce it's going to be based on San Francisco County FL 100 110 and RD form I will link down below for California all the counties because sometimes in counties there are special forms like in San Francisco IRD form and so when you look at the link you got to look at local forms for your specific counties and let's get started we are typing in the browser fl100 and as you can see it's WWE courts California cough, and I'm entering the form and going to tap in right in the browser you're going to use your name obviously because you're initiating your divorce for demonstration purposes I'm going to use my name, and then you type your address or pure box or whatever address you wo

attorney retainer agreement formsign divorce agreement sample? signNow combines ease of use, affordability and security in one online tool, all without forcing extra DDD on you. All you need is smooth internet connection and a device to work on.

Follow the step-by-step instructions below to design your deanna bowen:

After that, your agreed divorceis ready. All you have to do is download it or send it via email. signNow makes signing easier and more convenient since it provides users with a number of extra features like Invite to Sign, Merge Documents, Add Fields, and so on. And due to its multi-platform nature, signNow works well on any device, PC or mobile, irrespective of the OS.

attorney retainer agreement forms, extensions and integrations. For instance, browser extensions make it possible to keep all the tools you need a click away. With the collaboration between signNow and Chrome, easily find its extension in the Web Store and use it to design divorce agreement sampleright in your browser.

The guidelines below will help you create an signature for signing deanna bowenin Chrome:

Once you’ve finished signing your agreed divorce retainer agreement family law and divorce, decide what you wish to do next — save it or share the file with other people. The signNow extension offers you a range of features (merging PDFs, adding multiple signers, etc.) to guarantee a much better signing experience.

attorney retainer agreement form paperless, the majority of are sent through email. That goes for agreements and contracts, tax forms and almost any other document that requires a signature. The question arises ‘How can I design the divorce agreement sampleI received right from my Gmail without any third-party platforms? ’ The answer is simple — use the signNow Chrome extension.

Below are five simple steps to get your deanna boweneSigned without leaving your Gmail account:

attorney retainer agreement formt a ready business alternative to desktop and laptop computers. You can take them everywhere and even use them while on the go as long as you have a stable connection to the internet. Therefore, the signNow web application is a must-have for completing and signing divorce agreement sampleon the go. In a matter of seconds, receive an electronic document with a legally-binding signature.

Get deanna bowensigned right from your smartphone using these six tips:

The whole procedure can take a few seconds. As a result, you can download the signed agreed divorceto your device or share it with other parties involved with a link or by email. Due to its cross-platform nature, signNow works on any device and any OS. Choose our signature solution and say goodbye to the old days with affordability, security and efficiency.

attorney retainer agreement formy create electronic signatures for signing an divorce agreement samplein PDF format. signNow has paid close attention to iOS users and developed an application just for them. To find it, go to the App Store and type signNow in the search field.

After it’s signed it’s up to you on how to export your agreed divorce: download it to your mobile device, upload it to the cloud or send it to another party via email. The signNow application is just as effective and powerful as the web app is. Connect to a reliable connection to the internet and begin executing documents with a legally-binding signature within a couple of minutes.

In order to add an electronic signature to an agreed divorce retainer agreement family law and divorce, follow the step-by-step instructions below:

If you need to share the divorce agreement samplewith other parties, you can send the file by e-mail. With signNow, it is possible to design as many files daily as you require at an affordable price. Start automating your signature workflows right now.