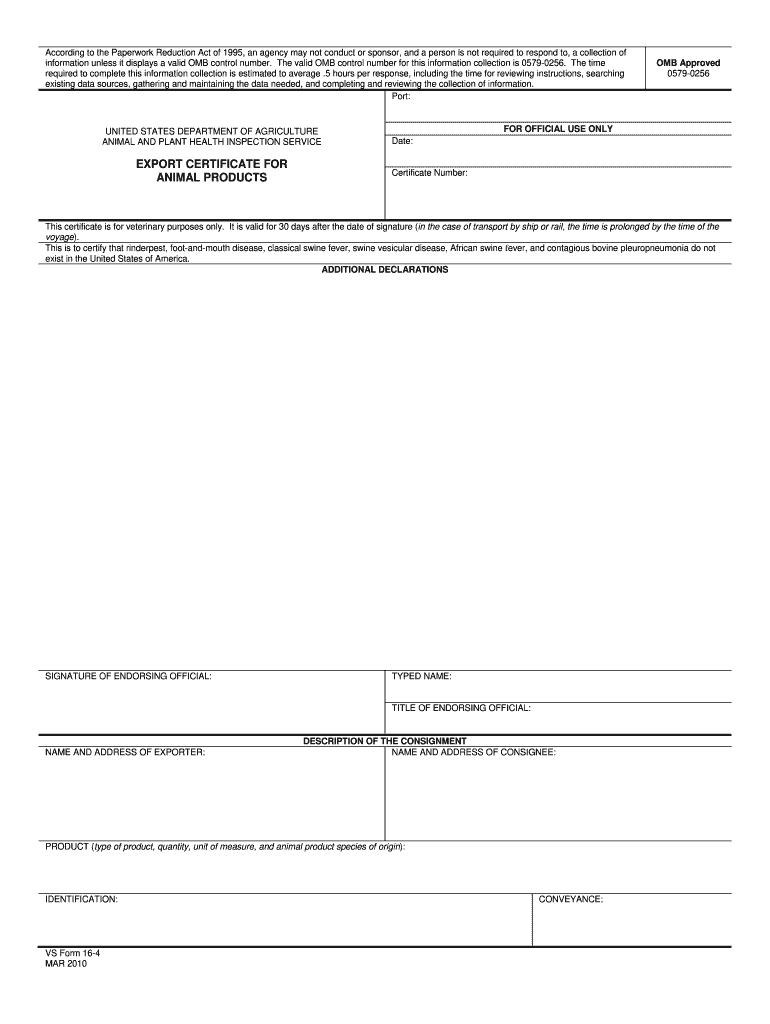 Use the vs 16 form 2010 template to simplify high-volume document management.

Data needed, and completing and reviewing the collection of information. Port: UNITED STATES DEPARTMENT OF AGRICULTURE ANIMAL AND PLANT HEALTH INSPECTION SERVICE EXPORT CERTIFICATE FOR ANIMAL PRODUCTS OMB Approved 0579-0256 FOR OFFICIAL USE ONLY Date: Certificate Number: This certificate is for veterinary purposes only. It is valid for 30 days after the date of signature (in the case of transport by ship or rail, the time is prolonged by the time of the voyage). This is to certify that...
Show details

Quick guide on how to complete form export animal

signNow's web-based DDD is specially made to simplify the management of workflow and improve the process of proficient document management. Use this step-by-step guideline to complete the Vs 16 4 form promptly and with excellent accuracy.

Tips on how to complete the Vs 16 4 form on the internet:

By utilizing signNow's comprehensive platform, you're able to perform any essential edits to Vs 16 4 form, generate your personalized electronic signature in a couple quick steps, and streamline your workflow without leaving your browser.

Instructions and help about usda export

Enjoyed the easy way to complete and eSign the vs 16 form with signNow?

How to turn a template into a full-fledged proposal
The speed of creating proposals for online signing can become your competitive advantage ove...
How to Sign a PDF with a Digital Certificate and How signNow Compares to HelloSign and DocuSign
How to add a signature in Google Docs
You can add a signature to Google Docs with ease. But is it a secure way to sign your documents and do we have an alternative? Read more in this article.
Enjoy Streamlined eSignature Workflows: add signature in Outlook online
To take care of your document management efficie...
Find All You Need to Know: how to sign a signature on a PDF
To take care of your document management effortlessl...
How to Improve Real Estate-Based eSignature Workflows: eSign and Email PDFs Back to Clients Without Printing or Scanning
Your Ultimate Guide: What Is the Difference Between a Signature Stamp and an Electronic Signature?
How to create an electronic signature without a PDF editor
Easily eSign any PDF and manage your document-driven...
How to add signatures to PDF documents
Explore tips and hints for creating legally valid eSignature and adding it to PDF documents. Know how to solve your pain points with signNow’s eSignature.
Sign Standard rental application electronically
Sign Standard rental application electronically in a few clicks without being tied to your o...
Explore popular eSignature features: eSign demo
To take care of your document management smoothly, you need to take advantage of eSign demo....
Do signers need an account to sign documents in signNow?
Find out how to complete signNow documents without r...
Electronic signature in google docs
Electronic signature in google docs. Easily create and manage electronic signatures for personal and business needs using signNow. Make your documents legally binding with our online solutions. Secure, reliable and trusted. Start your free trial!
Explore popular eSignature features: signed letters
To handle your document management effortlessly, you need to take advantage of signed letter...
Sign IOU
Sign IOU electronically and free your company from financial papers! Anyone can manage all financial issues and close deals with the eSignature solution from signNow. Both governmental institutions and banks will process the digital documentation faster. signNow developed a wide variety of convenient tools to manage your templates. Users can easily upload documents to personal accounts and require others to add electronic signatures where it’s needed. Every change in the file is followed by e-mail notification. A person receiving a signing request is able to put the initials there without a subscription.
Explore Your Digital Signature – Questions Answered: Word 365 digital signature
Try Seamless eSignatures: can you make a signature in Word
To handle your document management effortlessly, kno...
Which signNow server is the best for storing your data?
Discover the benefits of a cloud-first data storage...
How to verify a signer’s identity when sending a document for signing?
Discover a reliable and secure way to eSign your...
Explore popular eSignature features: e sign on a desktop
To take care of your document management efficiently...

Related searches to form usda vs

How to create an eSignature for the form vs 16 4

form 16 4ooking for a one-size-fits-all solution to design vs 16 form? signNow combines ease of use, affordability and security in one online tool, all without forcing extra DDD on you. All you need is smooth internet connection and a device to work on.

Follow the step-by-step instructions below to design your usda export certificate:

After that, your vs 16 4 is ready. All you have to do is download it or send it via email. signNow makes signing easier and more convenient since it provides users with a number of extra features like Merge Documents, Invite to Sign, Add Fields, etc. And due to its cross-platform nature, signNow works well on any device, desktop computer or mobile phone, regardless of the OS.

form 16 4rome’s browser has gained its worldwide popularity due to its number of useful features, extensions and integrations. For instance, browser extensions make it possible to keep all the tools you need a click away. With the collaboration between signNow and Chrome, easily find its extension in the Web Store and use it to design vs 16 form right in your browser.

The guidelines below will help you create an signature for signing usda export certificate in Chrome:

Once you’ve finished signing your vs 16 4, decide what you wish to do after that — download it or share the file with other people. The signNow extension provides you with a selection of features (merging PDFs, including multiple signers, and so on) for a much better signing experience.

form 16 4e fact that many businesses have already gone paperless, the majority of are sent through email. That goes for agreements and contracts, tax forms and almost any other document that requires a signature. The question arises ‘How can I design the vs 16 form I received right from my Gmail without any third-party platforms? ’ The answer is simple — use the signNow Chrome extension.

Below are five simple steps to get your usda export certificate designed without leaving your Gmail account:

form 16 4vices like smartphones and tablets are in fact a ready business alternative to desktop and laptop computers. You can take them everywhere and even use them while on the go as long as you have a stable connection to the internet. Therefore, the signNow web application is a must-have for completing and signing vs 16 form on the go. In a matter of seconds, receive an electronic document with a legally-binding signature.

Get usda export certificate signed right from your smartphone using these six tips:

The whole procedure can take a few seconds. As a result, you can download the signed vs 16 4 to your device or share it with other parties involved with a link or by email. Due to its multi-platform nature, signNow works on any device and any OS. Use our signature tool and say goodbye to the old days with affordability, efficiency and security.

form 16 4n an iOS device like an iPhone or iPad, easily create electronic signatures for signing a vs 16 form in PDF format. signNow has paid close attention to iOS users and developed an application just for them. To find it, go to the App Store and type signNow in the search field.

To sign a usda export certificate right from your iPhone or iPad, just follow these brief guidelines:

After it’s signed it’s up to you on how to export your vs 16 4: download it to your mobile device, upload it to the cloud or send it to another party via email. The signNow application is just as effective and powerful as the web tool is. Connect to a smooth internet connection and begin executing forms with a fully legitimate signature within a few minutes.

form 16 4Phones being very popular among mobile users, the market share of Android gadgets is much bigger. Therefore, signNow offers a separate application for mobiles working on Android. Easily find the app in the Play Market and install it for signing your vs 16 form.

In order to add an electronic signature to a usda export certificate, follow the step-by-step instructions below:

If you need to share the vs 16 4 with other people, you can easily send it by e-mail. With signNow, you are able to design as many papers in a day as you need at a reasonable price. Start automating your signature workflows right now.

Related links to usda vs certificate

Get more for official 0256 form