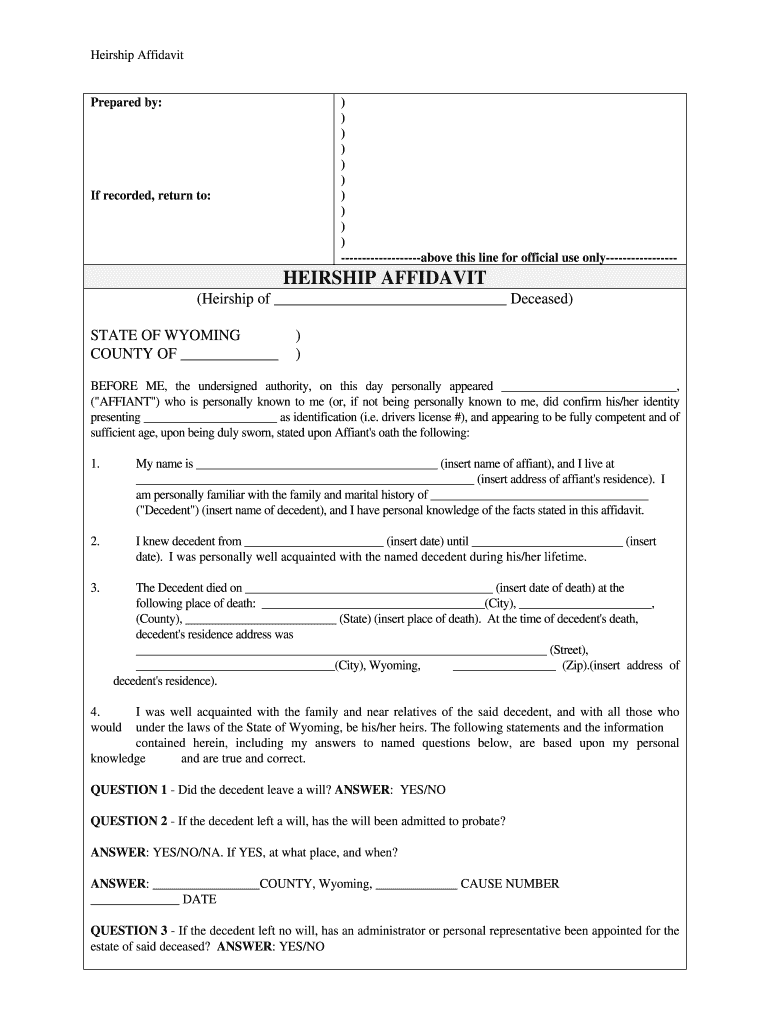 If Recorded, Return to Form

Use a If Recorded, Return To template to make your document workflow more streamlined.

ANSWER COUNTY NAME ADDRESS CAUSE NUMBER QUESTION 5 - Give the name and address of the surviving widow or widower of decedent. I knew decedent from insert date until insert date. I was personally well acquainted with the named decedent during his/her lifetime. I am personally familiar with the family and marital history of Decedent insert name of decedent and I have personal knowledge of the facts stated in this affidavit. If YES at what place and when ANSWER COUNTY Wyoming CAUSE NUMBER estate...
Show details

Quick guide on how to complete if recorded return to

signNow's web-based service is specially designed to simplify the arrangement of workflow and improve the process of proficient document management. Use this step-by-step guideline to complete the Get And Sign If Recorded, Return To: Form quickly and with perfect accuracy.

The way to fill out the Get And Sign If Recorded, Return To: Form on the internet:

By utilizing signNow's complete platform, you're able to complete any necessary edits to Get And Sign If Recorded, Return To: Form, make your customized digital signature within a few fast steps, and streamline your workflow without leaving your browser.

Video instructions and help with filling out and completing If Recorded, Return To Form

Instructions and help about If Recorded, Return To

Today I'm explaining how to file form 1040x the amended US income tax return you can see the return behind me here this is your federal amended tax return to the top here you can see this is a 27 version which you should file the 2017 version of 1040 acts if you're amending your return in 2017, and you can see here there's 2016 you can just check the box for whichever tax year applies you only want to check one box enter other calendar year or fiscal year usually you will leave this blank that is not common for individuals to have a different calendar year other than the standard 1231 down here you'll enter your first name and initial followed by your last name and social security number if you did file a joint return with your spouse be sure to list your names in the same order as they were filed on the return you're amending in other words if your husband's name went first and then your name as a spouse second be sure to list them that way on the amended return it's not a fine if you

Related searches to If Recorded, Return To

How to create an eSignature for the if recorded return to

Are you looking for a one-size-fits-all solution to design if recorded return to? signNow combines ease of use, affordability and security in one online tool, all without forcing extra DDD on you. All you need is smooth internet connection and a device to work on.

Follow the step-by-step instructions below to design your if recorded return to:

After that, your if recorded return to is ready. All you have to do is download it or send it via email. signNow makes signing easier and more convenient since it provides users with numerous additional features like Invite to Sign, Merge Documents, Add Fields, and so on. And because of its cross-platform nature, signNow works well on any device, PC or smartphone, irrespective of the operating system.

Google Chrome’s browser has gained its worldwide popularity due to its number of useful features, extensions and integrations. For instance, browser extensions make it possible to keep all the tools you need a click away. With the collaboration between signNow and Chrome, easily find its extension in the Web Store and use it to design if recorded return to right in your browser.

The guidelines below will help you create an signature for signing if recorded return to in Chrome:

Once you’ve finished signing your if recorded return to, decide what you should do next — save it or share the document with other people. The signNow extension provides you with a selection of features (merging PDFs, including several signers, and many others) to guarantee a better signing experience.

Due to the fact that many businesses have already gone paperless, the majority of are sent through email. That goes for agreements and contracts, tax forms and almost any other document that requires a signature. The question arises ‘How can I design the if recorded return to I received right from my Gmail without any third-party platforms? ’ The answer is simple — use the signNow Chrome extension.

Below are five simple steps to get your if recorded return to designed without leaving your Gmail account:

The signNow extension was developed to help busy people like you to reduce the stress of signing legal forms. Start putting your signature on if recorded return to by means of solution and become one of the numerous happy users who’ve previously experienced the advantages of in-mail signing.

Mobile devices like smartphones and tablets are in fact a ready business alternative to desktop and laptop computers. You can take them everywhere and even use them while on the go as long as you have a stable connection to the internet. Therefore, the signNow web application is a must-have for completing and signing if recorded return to on the go. In a matter of seconds, receive an electronic document with a legally-binding signature.

Get if recorded return to signed right from your smartphone using these six tips:

The whole procedure can take a few seconds. You can download the signed [Form] to your device or share it with other parties involved with a link or by email, as a result. Due to its multi-platform nature, signNow works on any device and any OS. Use our signature tool and leave behind the old times with efficiency, affordability and security.

If you own an iOS device like an iPhone or iPad, easily create electronic signatures for signing an if recorded return to in PDF format. signNow has paid close attention to iOS users and developed an application just for them. To find it, go to the App Store and type signNow in the search field.

To sign an if recorded return to right from your iPhone or iPad, just follow these brief guidelines:

After it’s signed it’s up to you on how to export your if recorded return to: download it to your mobile device, upload it to the cloud or send it to another party via email. The signNow application is just as effective and powerful as the online tool is. Connect to a smooth internet connection and begin executing documents with a court-admissible signature within minutes.

Despite iPhones being very popular among mobile users, the market share of Android gadgets is much bigger. Therefore, signNow offers a separate application for mobiles working on Android. Easily find the app in the Play Market and install it for signing your if recorded return to.

In order to add an electronic signature to an if recorded return to, follow the step-by-step instructions below:

If you need to share the if recorded return to with other people, it is possible to send the file by email. With signNow, you are able to design as many papers in a day as you require at a reasonable cost. Start automating your signature workflows today.

Related links to If Recorded, Return To

Get more for If Recorded, Return To

Find out other If Recorded, Return To