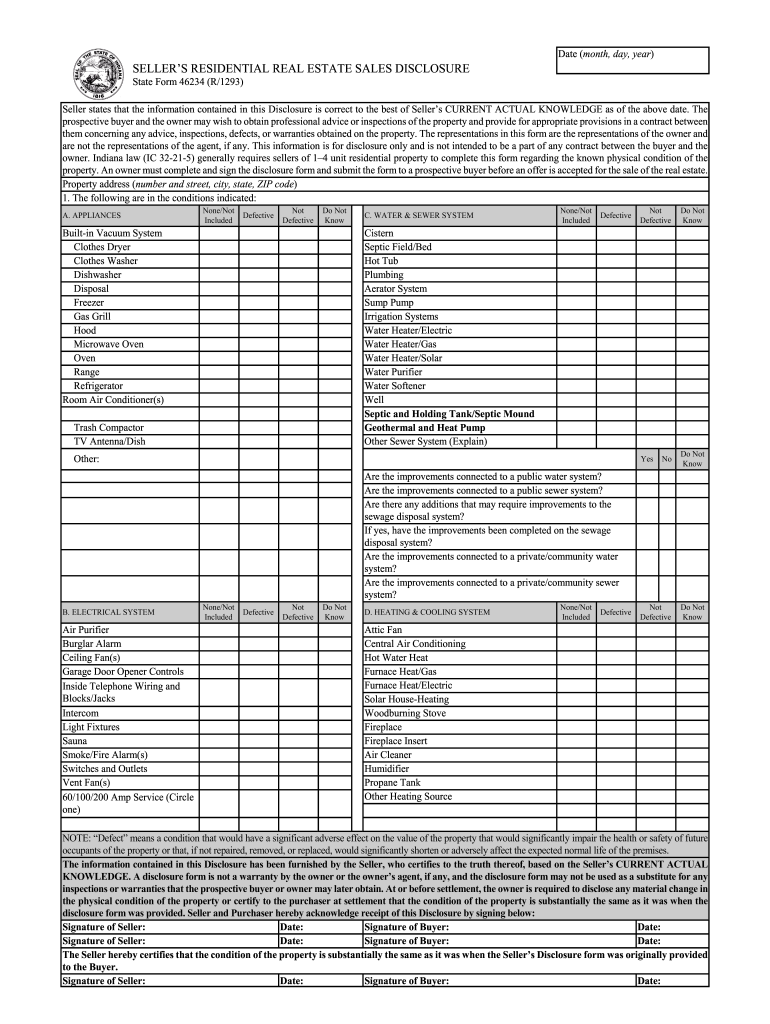 Speed up transactions with the indiana sales disclosure form 0 template.

Representations in this form are the representations of the owner and are not the representations of the agent if any. This information is for disclosure only and is not intended to be a part of any contract between the buyer and the owner. Indiana law IC 32-21-5 generally requires sellers of 1 4 unit residential property to complete this form regarding the known physical condition of the property. An owner must complete and sign the disclosure form and submit the form to a prospective buyer...
Show details

Quick guide on how to complete indiana state form 46234

signNow's web-based service is specially made to simplify the organization of workflow and improve the whole process of proficient document management. Use this step-by-step instruction to complete the Form seller quickly and with excellent accuracy.

The way to fill out the Form seller on the web:

By utilizing signNow's complete platform, you're able to perform any needed edits to Form seller, generate your customized digital signature in a few quick steps, and streamline your workflow without leaving your browser.

Hello hey this is Sean we're going to go over how to fill out a seller's disclosure statement this is required whenever you put your house in the market, and it's something that the seller has to do only so there shouldn't be any other ten marks on this sheet except missus or mister seller okay the rule about disclosure is if you are wondering whether you should disclose something you need to disclose it okay this is the number one reason people get sued in rEval estate is because the seller either forgot about it or they just didn't want to put it on there because I thought it would affect the sale unfortunately buyers have a way of finding they have a way of finding out what happens so maybe like a neighbor might come over and say hey Mr. buyer you just moved in DJ did they tell you about that flood they had two years ago and then the can of worms comes up okay, so anyway that's kind of the general rule now filling this thing out it's pretty self-explanatory, but there's a couple tri

real estate disclosure form indianalooking for a one-size-fits-all solution to design indiana sales disclosure form? signNow combines ease of use, affordability and security in one online tool, all without forcing extra DDD on you. All you need is smooth internet connection and a device to work on.

Follow the step-by-step instructions below to design your sales disclosure form indiana:

After that, your sellers disclosure statements is ready. All you have to do is download it or send it via email. signNow makes signing easier and more convenient since it provides users with a number of additional features like Merge Documents, Invite to Sign, Add Fields, and many others. And due to its multi-platform nature, signNow can be used on any gadget, personal computer or smartphone, irrespective of the operating system.

real estate disclosure form indianahrome’s browser has gained its worldwide popularity due to its number of useful features, extensions and integrations. For instance, browser extensions make it possible to keep all the tools you need a click away. With the collaboration between signNow and Chrome, easily find its extension in the Web Store and use it to design indiana sales disclosure form right in your browser.

The guidelines below will help you create an signature for signing sales disclosure form indiana in Chrome:

Once you’ve finished signing your sellers disclosure statements, decide what you want to do after that — save it or share the file with other parties involved. The signNow extension gives you a selection of features (merging PDFs, adding several signers, and many others) to guarantee a better signing experience.

real estate disclosure form indianahe fact that many businesses have already gone paperless, the majority of are sent through email. That goes for agreements and contracts, tax forms and almost any other document that requires a signature. The question arises ‘How can I design the indiana sales disclosure form I received right from my Gmail without any third-party platforms? ’ The answer is simple — use the signNow Chrome extension.

Below are five simple steps to get your sales disclosure form indiana designed without leaving your Gmail account:

The signNow extension was developed to help busy people like you to reduce the burden of signing papers. Begin putting your signature on sellers disclosure statements by means of solution and become one of the millions of happy users who’ve previously experienced the advantages of in-mail signing.

real estate disclosure form indianaclosure statementsevices like smartphones and tablets are in fact a ready business alternative to desktop and laptop computers. You can take them everywhere and even use them while on the go as long as you have a stable connection to the internet. Therefore, the signNow web application is a must-have for completing and signing indiana sales disclosure form on the go. In a matter of seconds, receive an electronic document with a legally-binding signature.

The whole procedure can take less than a minute. You can download the signed [Form] to your device or share it with other parties involved with a link or by email, as a result. Due to its universal nature, signNow works on any device and any OS. Use our signature solution and leave behind the old times with efficiency, affordability and security.

real estate disclosure form indianawn an iOS device like an iPhone or iPad, easily create electronic signatures for signing a indiana sales disclosure form in PDF format. signNow has paid close attention to iOS users and developed an application just for them. To find it, go to the App Store and type signNow in the search field.

To sign a sales disclosure form indiana right from your iPhone or iPad, just follow these brief guidelines:

After it’s signed it’s up to you on how to export your sellers disclosure statements: download it to your mobile device, upload it to the cloud or send it to another party via email. The signNow application is just as efficient and powerful as the online app is. Get connected to a smooth internet connection and start completing documents with a fully legitimate electronic signature within minutes.

real estate disclosure form indianaiPhones being very popular among mobile users, the market share of Android gadgets is much bigger. Therefore, signNow offers a separate application for mobiles working on Android. Easily find the app in the Play Market and install it for signing your indiana sales disclosure form.

In order to add an electronic signature to a sales disclosure form indiana, follow the step-by-step instructions below:

If you need to share the sellers disclosure statements with other parties, it is possible to send the file by e-mail. With signNow, you cane Sign as many papers daily as you require at a reasonable price. Begin automating your signature workflows today.