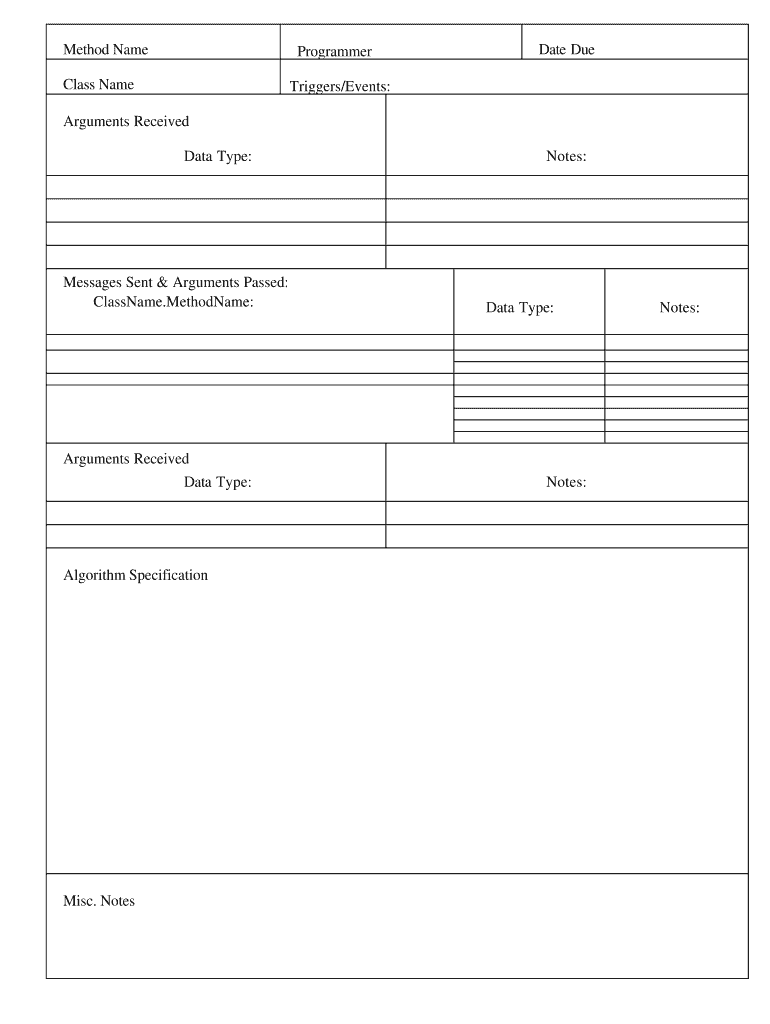 Get a specification form 0 template with signNow and complete it in a few simple clicks.

Quick guide on how to complete method specification

signNow's web-based application is specifically made to simplify the organization of workflow and enhance the whole process of qualified document management. Use this step-by-step instruction to fill out the Method specification form swiftly and with perfect precision.

How you can fill out the Method specification form on the internet:

By making use of signNow's comprehensive solution, you're able to perform any essential edits to Method specification form, make your customized electronic signature in a couple of fast actions, and streamline your workflow without the need of leaving your browser.

Video instructions and help with filling out and completing Specifications Form

Enjoyed the easy way to complete and eSign the specification form with signNow?

Explore popular eSignature features: eSign sign in
To handle your document management smoothly, you need to use eSign sign in. Otherwise, you r...
Explore popular eSignature features: doc signature
To deal with your document management efficiently, you need to take advantage of doc signatu...
How to verify a signer’s identity when sending a document for signing?
Discover a reliable and secure way to eSign your...
How to add a signature in Google Docs
You can add a signature to Google Docs with ease. But is it a secure way to sign your documents and do we have an alternative? Read more in this article.
How to create an electronic signature without a PDF editor
Easily eSign any PDF and manage your document-driven...
Explore Your Digital Signature – Questions Answered: apply digital signature to PDF
Find All You Need to Know: online signature on PDF
To handle your document management smoothly, you need to use online signature on PDF. Otherw...
Unlock the Power of eSignature: free sign maker
To handle your document management effortlessly, you need to take advantage of free sign mak...
How to Improve Real Estate-Based eSignature Workflows: eSign and Email PDFs Back to Clients Without Printing or Scanning
Your Ultimate Guide: What Is the Difference Between a Signature Stamp and an Electronic Signature?
Explore Your Digital Signature – Questions Answered: add digital signature
To take care of your document management efficie...
Which signNow server is the best for storing your data?
Discover the benefits of a cloud-first data storage...
How to Sign a PDF with a Digital Certificate and How signNow Compares to HelloSign and DocuSign
Do signers need an account to sign documents in signNow?
Find out how to complete signNow documents without r...
How to turn a template into a full-fledged proposal
The speed of creating proposals for online signing can become your competitive advantage ove...
Sign Postnuptial Agreement Template
signNow solution helps easily sign any digital document online! Our users can create legally binding signatures and add them to Postnuptial Agreement Template.The letter, application or agreement can be uploaded to the personal account and then edited.Now any family affair will be processed faster, thanks to the electronic format of the template.Create eSignature in the typed or handwritten style in several simple steps! Draw it with the finger on a smartphone, touchpad or with a mouse. Authorized customers may re-use the samples created before. With the mobile signNow application documents are certified with a drawn autograph or captured with camera initials.
Start Your eSignature Journey: eSign for realtors
To take care of your document management efficiently, you need to take advantage of eSign fo...
Signature studio
Signature studio. Easily sign any document online with secure eSignature solutions by signNow. Forget about printing and scanning your files. No downloading needed. Fast and simple. Start your free trial!
How to add signatures to PDF documents
Explore tips and hints for creating legally valid eSignature and adding it to PDF documents. Know how to solve your pain points with signNow’s eSignature.
Unlock the Power of eSignature: free document signature software
To deal with your document management efficientl...

Related searches to out of specification form

How to create an eSignature for the process specification form template

Are you looking for a one-size-fits-all solution to design specification form? signNow combines ease of use, affordability and security in one online tool, all without forcing extra DDD on you. All you need is smooth internet connection and a device to work on.

Follow the step-by-step instructions below to design your form specification:

After that, your method of specification is ready. All you have to do is download it or send it via email. signNow makes signing easier and more convenient since it provides users with a number of extra features like Add Fields, Merge Documents, Invite to Sign, etc. And because of its multi-platform nature, signNow works well on any gadget, PC or mobile, regardless of the operating system.

Google Chrome’s browser has gained its worldwide popularity due to its number of useful features, extensions and integrations. For instance, browser extensions make it possible to keep all the tools you need a click away. With the collaboration between signNow and Chrome, easily find its extension in the Web Store and use it to design specification form right in your browser.

The guidelines below will help you create an signature for signing form specification in Chrome:

Once you’ve finished signing your method of specification, decide what you wish to do next — download it or share the file with other parties involved. The signNow extension provides you with a range of features (merging PDFs, adding numerous signers, etc.) for a better signing experience.

Due to the fact that many businesses have already gone paperless, the majority of are sent through email. That goes for agreements and contracts, tax forms and almost any other document that requires a signature. The question arises ‘How can I design the specification form I received right from my Gmail without any third-party platforms? ’ The answer is simple — use the signNow Chrome extension.

Below are five simple steps to get your form specification designed without leaving your Gmail account:

method of specificationartphones and tablets are in fact a ready business alternative to desktop and laptop computers. You can take them everywhere and even use them while on the go as long as you have a stable connection to the internet. Therefore, the signNow web application is a must-have for completing and signing specification form on the go. In a matter of seconds, receive an electronic document with a legally-binding signature.

Get form specification signed right from your smartphone using these six tips:

The whole procedure can take less than a minute. You can download the signed [Form] to your device or share it with other parties involved with a link or by email, as a result. Because of its cross-platform nature, signNow works on any gadget and any operating system. Choose our signature solution and forget about the old days with security, efficiency and affordability.

If you own an iOS device like an iPhone or iPad, easily create electronic signatures for signing a specification form in PDF format. signNow has paid close attention to iOS users and developed an application just for them. To find it, go to the App Store and type signNow in the search field.

After it’s signed it’s up to you on how to export your method of specification: download it to your mobile device, upload it to the cloud or send it to another party via email. The signNow application is just as efficient and powerful as the online tool is. Get connected to a smooth internet connection and begin completing documents with a legally-binding signature in minutes.

Despite iPhones being very popular among mobile users, the market share of Android gadgets is much bigger. Therefore, signNow offers a separate application for mobiles working on Android. Easily find the app in the Play Market and install it for signing your specification form.

In order to add an electronic signature to a form specification, follow the step-by-step instructions below:

If you need to share the method of specification with other parties, you can send it by e-mail. With signNow, you cane Sign as many documents per day as you require at an affordable price. Start automating your signature workflows today.

Get more for form specification sample