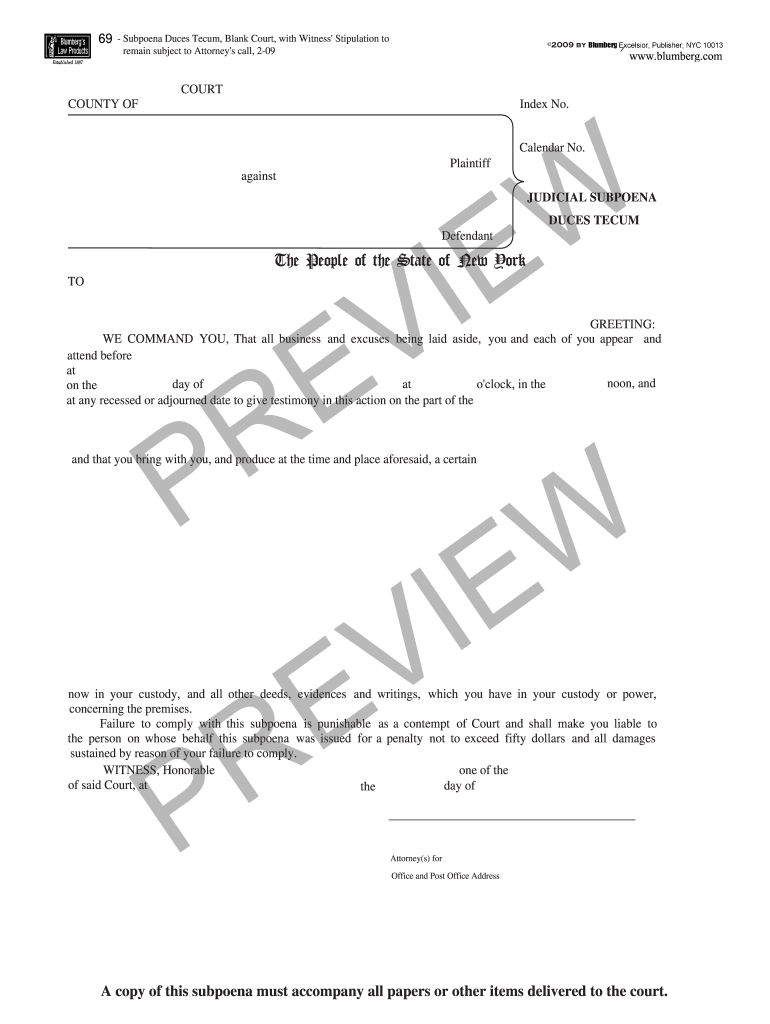 This action on the part of the W E I and that you bring with you, and produce at the time and place aforesaid, a certain V E R P now in your custody, and all other deeds, evidences and writings, which you have in your custody or power, concerning the premises. Failure to comply with this subpoena is punishable as a contempt of Court and shall make you liable to the person on whose behalf this subpoena was issued for a penalty not to exceed fifty dollars and all damages sustained by reason...
Show details

Quick guide on how to complete subpoena duces tecum example

signNow's web-based service is specifically created to simplify the organization of workflow and optimize the process of qualified document management. Use this step-by-step guideline to fill out the Sample judicial subpoena New York form swiftly and with idEval precision.

How you can fill out the Sample judicial subpoena New York form on the web:

By using signNow's complete platform, you're able to complete any required edits to Sample judicial subpoena New York form, generate your personalized digital signature in a couple of quick actions, and streamline your workflow without the need of leaving your browser.

Again welcome back attorney Steve Fondled this is a rEval estate lawyer we are talking in this episode about the subpoena the word that's very difficult to spell but very effective tool when you're litigating cases okay and sometimes even in your arbitration your rEval estate arbitration cases okay so without further ado let's head to the attorney Steve litigation white board okay so let's back it up here, so we are talking about the subpoena okay I said it's a tough word to spell SU BPO en a that will help you spell if it's not an easy word to spell I misspelled all the time we've got to double-check my spelling and whatnot okay so here's what it is basically and here's my picture let's here's my subpoena right here okay a subpoena is nothing more than a fancy documents I mean they're just basically documents that say I need something I need some I need some documents I'm involved in a case and I need and I need some documents okay in for purposes of this video let's talk about an esc

Enjoy Streamlined eSignature Workflows: how to add electronic signature to email
If there are similar fields for name, can I autofill the other name fields?
How to eSign a PDF Document Multiple Times Using signNow
Learn how to edit a form or contract, eSign PDF docu...
Explore Your Digital Signature – Questions Answered: digital signature on documents
Explore Your Digital Signature – Questions Answered: how to do digital signature in Google Docs
Find All You Need to Know: PDF eSignature
To handle your document management efficiently, you need to use PDF eSignature. Otherwise, you risk being stressed with documentation. Finding a complex eSignature solution is essential for you and your company. If you want expert document management that’s fast, reasonably priced, and secure, give signNow a shot. signNow is intuitive, and you can start the process without a learning curve of any kind. The solution delivers many features to make eSignature workflows easier. Adding documents from the cloud, mass sending documents, or building a multi-subscriber workflow is some of the features you can use. Want to get the most from PDF eSignature? Save time. Printing and scanning, and the physical delivery of papers are rapidly getting stuff of the past. You can now create, send, and eSign PDFs online in clicks. eSign on the go. Increase the capabilities of your mobile phone and tablet with signNow. Install the app and take advantage of PDF eSignature from anywhere. Monitor templates. Be aware of modifications going on in your PDFs. While using Audit Trail function, you can check the status of your records and discover the time, email, and IP address of those dealing with them. Connect with your preferred applications. Implement your workflow into any third-party application and operate habitual processes from a single tab. Connect your account to Gmail and sign PDFs using the signNow add-on. Team up. Collaborate on your tasks with coworkers. Build team folders, add employees, and add records to work on. There are a number of other solutions available on the market that have PDF eSignature, but signNow provides you with a complex eSignature workflow. Digitally transform your company with sophisticated signing assistance, mass sending possibilities, role-based signing orders, and much more.
Can I make a template in signNow?
Save time by creating templates in signNow and quickly customizing them. Use templates to collect signatures from the web, in bulk, and in-person faster.
Enjoy Flexible eSignature Workflows: how can I sign a document on my iPhone
Electronic vs. digital signatures: everything you need to know
There’s a lot of misunderstanding when it comes...
“How many templates am I allowed?" "Is there a file size limit on uploading documents?"
Electronic signature google forms
Electronic signature google forms. Choose only legally binding and secure electronic signature software. Sign your documents and close deals easily from any device with signNow. Store and access files anywhere any time.
Enjoy Flexible eSignature Workflows: how to e sign a document
To handle your document management easily, you n...
A Detailed Guide on How to Sign a PDF Online in signNow
Doing business digitally is the only way to increase...
Unlock the Power of eSignature: online signature software
To handle your document management smoothly, you nee...
Sign Executive Summary Template electronically
Creating legally binding eSignatures has become easier than ever. signNow provides...
How to sign as power of attorney
Use signNow to help sign as power of attorney and enjoy the benefits of electronic notarization!
Explore Your Digital Signature – Questions Answered: digital signature converter
Can I add my logo to documents? How would it look?
Learn how to add a custom logo to your signNow documents and find out which benefits your co...
How to eSign documents on mobile devices
Learn how to put an electronic signature and make the document legally binding right from your smartphone.
How to sign a PDF that has already been signed by someone else
eSign forms and contracts with legally-binding s...

How to create an eSignature for the ny federal subpoena template

subpoena template-all solution to design new york subpoena duces tecum form? signNow combines ease of use, affordability and security in one online tool, all without forcing extra DDD on you. All you need is smooth internet connection and a device to work on.

Follow the step-by-step instructions below to design your nys subpoena duces tecum form:

After that, your new york subpoena form is ready. All you have to do is download it or send it via email. signNow makes signing easier and more convenient since it provides users with numerous additional features like Add Fields, Invite to Sign, Merge Documents, and so on. And due to its cross-platform nature, signNow can be used on any device, personal computer or mobile, regardless of the OS.

subpoena templated its worldwide popularity due to its number of useful features, extensions and integrations. For instance, browser extensions make it possible to keep all the tools you need a click away. With the collaboration between signNow and Chrome, easily find its extension in the Web Store and use it to design new york subpoena duces tecum form right in your browser.

The guidelines below will help you create an signature for signing nys subpoena duces tecum form in Chrome:

Once you’ve finished signing your new york subpoena form, decide what you wish to do after that — save it or share the document with other people. The signNow extension offers you a selection of features (merging PDFs, adding several signers, etc.) for a much better signing experience.

subpoena templates have already gone paperless, the majority of are sent through email. That goes for agreements and contracts, tax forms and almost any other document that requires a signature. The question arises ‘How can I design the new york subpoena duces tecum form I received right from my Gmail without any third-party platforms? ’ The answer is simple — use the signNow Chrome extension.

Below are five simple steps to get your nys subpoena duces tecum form designed without leaving your Gmail account:

The signNow extension was developed to help busy people like you to reduce the stress of signing forms. Start signing new york subpoena form using our tool and become one of the millions of satisfied clients who’ve already experienced the advantages of in-mail signing.

subpoena template tablets are in fact a ready business alternative to desktop and laptop computers. You can take them everywhere and even use them while on the go as long as you have a stable connection to the internet. Therefore, the signNow web application is a must-have for completing and signing new york subpoena duces tecum form on the go. In a matter of seconds, receive an electronic document with a legally-binding signature.

The whole procedure can take a few seconds. As a result, you can download the signed new york subpoena form to your device or share it with other parties involved with a link or by email. Because of its universal nature, signNow is compatible with any gadget and any OS. Use our signature solution and leave behind the old days with efficiency, security and affordability.

subpoena templatehone or iPad, easily create electronic signatures for signing a new york subpoena duces tecum form in PDF format. signNow has paid close attention to iOS users and developed an application just for them. To find it, go to the App Store and type signNow in the search field.

To sign a nys subpoena duces tecum form right from your iPhone or iPad, just follow these brief guidelines:

After it’s signed it’s up to you on how to export your new york subpoena form: download it to your mobile device, upload it to the cloud or send it to another party via email. The signNow application is just as effective and powerful as the web solution is. Connect to a reliable web connection and start executing documents with a court-admissible electronic signature within a few minutes.

subpoena templateamong mobile users, the market share of Android gadgets is much bigger. Therefore, signNow offers a separate application for mobiles working on Android. Easily find the app in the Play Market and install it for signing your new york subpoena duces tecum form.

In order to add an electronic signature to a nys subpoena duces tecum form, follow the step-by-step instructions below:

If you need to share the new york subpoena form with other people, you can easily send the file by email. With signNow, it is possible to design as many papers daily as you require at a reasonable cost. Begin automating your signature workflows right now.

Get more for judicial subpoena template