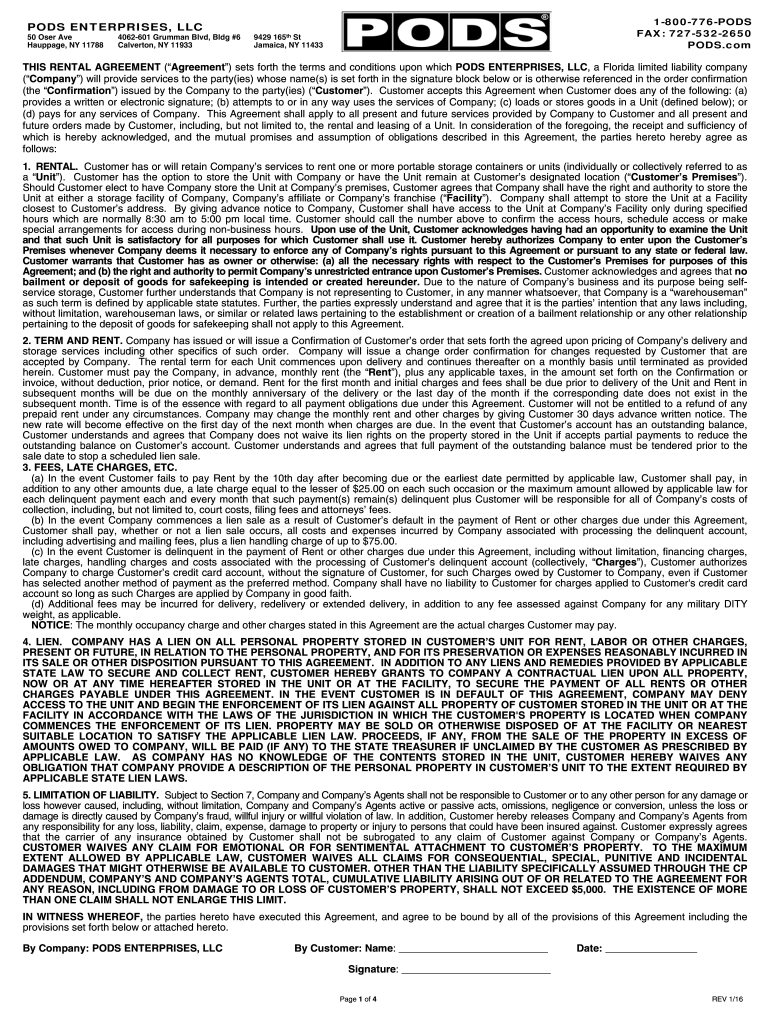 Use a mypods template to make your document workflow more streamlined.

“Confirmation”) issued by the Company to the party(ies) (“Customer”). Customer accepts this Agreement when Customer does any of the following: (a) provides a written or electronic signature; (b) attempts to or in any way uses the services of Company; (c) loads or stores goods in a Unit (defined below); or (d) pays for any services of Company. This Agreement shall apply to all present and future services provided by Company to Customer and all present and future orders made by Customer,...
Show details

Quick guide on how to complete pods com login

signNow's web-based application is specially created to simplify the arrangement of workflow and improve the whole process of competent document management. Use this step-by-step guide to complete the Get And Sign THIS RENTAL AGREEMENT (Agreement) — United States — Pods Form promptly and with perfect accuracy.

The way to fill out the Get And Sign THIS RENTAL AGREEMENT (Agreement) — United States — Pods Form online:

By making use of signNow's comprehensive solution, you're able to execute any necessary edits to Get And Sign THIS RENTAL AGREEMENT (Agreement) — United States — Pods Form, make your personalized digital signature in a couple of quick steps, and streamline your workflow without leaving your browser.

Instructions and help about my pod com

hey doing this is Joe from Ibiza agreement calm and I'm going to guide you through how you fill out a standard lease agreement okay the first part we have the term of the lease agreement how many months is it going to be a typical residential lease agreement is 12 months, so we're just going to write 12 right in here beginning at least usually begins on the first day of a month, and we'll just do January the year 2013 let's say it starts in the future, and it ends on I'll say December 31st 2013 when you lease landlord will just make the landlord be landlord ink with a mailing address of 9v landlord legs 3 put in the landlord's address on the city of landlord Villa state of York zip code well I don't know he's in codes in New York, so I'll actually got to Florida 3 3 1 39 which is Miami Beach and the tenant will just say his name is Joseph 10 man and the Landlord agrees to lease the premises located at we'll just do our office address which is 90 Alton Road I won't say the suite city of

How to create an eSignature for the mypod login

my pods online tool, all without forcing extra DDD on you. All you need is smooth internet connection and a device to work on.

Follow the step-by-step instructions below to design you're this rental agreement United States pods:

After that, you're this rental agreement United States pods is ready. All you have to do is download it or send it via email. signNow makes signing easier and more convenient since it provides users with numerous additional features like Merge Documents, Add Fields, Invite to Sign, and so on. And because of its multi-platform nature, signNow can be used on any device, personal computer or mobile, regardless of the operating system.

my podske it possible to keep all the tools you need a click away. With the collaboration between signNow and Chrome, easily find its extension in the Web Store and use it to design this rental agreement United States pods right in your browser.

The guidelines below will help you create an signature for signing this rental agreement United States pods in Chrome:

Once you’ve finished signing your this rental agreement United States pods, decide what you should do next — save it or share the doc with other people. The signNow extension provides you with a range of features (merging PDFs, adding several signers, etc.) for a better signing experience.

my podsst any other document that requires a signature. The question arises ‘How can I design the rental agreement United States pods I received right from my Gmail without any third-party platforms? ’ The answer is simple — use the signNow Chrome extension.

Below are five simple steps to get your this rental agreement United States pods designed without leaving your Gmail account:

The signNow extension was developed to help busy people like you to reduce the stress of signing papers. Start signing this rental agreement United States pods with our tool and become one of the millions of satisfied clients who’ve already experienced the benefits of in-mail signing.

my pods while on the go as long as you have a stable connection to the internet. Therefore, the signNow web application is a must-have for completing and signing this rental agreement United States pods on the go. In a matter of seconds, receive an electronic document with a legally-binding signature.

Get this rental agreement United States pods signed right from your smartphone using these six tips:

The whole procedure can take a few seconds. You can download the signed [Form] to your device or share it with other parties involved with a link or by email, as a result. Because of its universal nature, signNow is compatible with any device and any OS. Choose our signature solution and leave behind the old days with security, efficiency and affordability.

my podsid close attention to iOS users and developed an application just for them. To find it, go to the App Store and type signNow in the search field.

To sign a rental agreement United States pods right from your iPhone or iPad, just follow these brief guidelines:

After it’s signed it’s up to you on how to export your this rental agreement United States pods: download it to your mobile device, upload it to the cloud or send it to another party via email. The signNow application is just as effective and powerful as the online solution is. Connect to a strong web connection and start executing documents with a court-admissible electronic signature in minutes.

my podsles working on Android. Easily find the app in the Play Market and install it for signing you're this rental agreement United States pods.

In order to add an electronic signature to a rental agreement United States pods, follow the step-by-step instructions below:

If you need to share the rental agreement United States pods with other people, it is possible to send the file by electronic mail. With signNow, you are able to design as many files daily as you require at a reasonable cost. Begin automating your signature workflows today.

Find out other mypods con