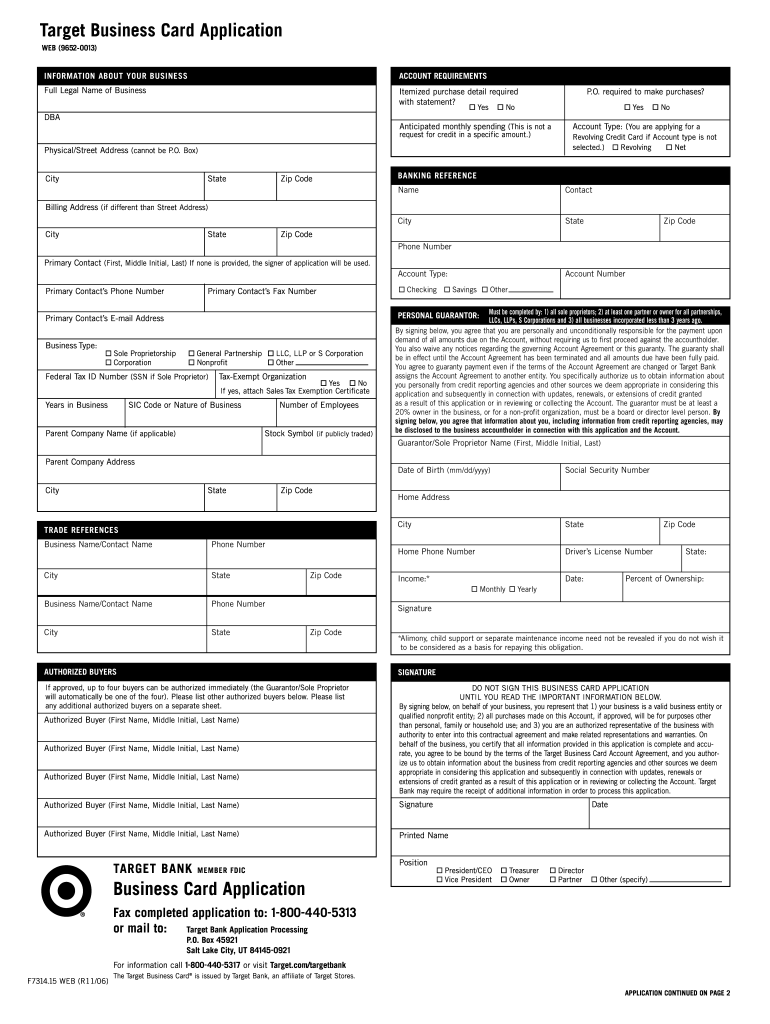 Savings on a full day of shopping at any Target store when you use your Target Business Card. Card is required to make purchases. The information about the terms of the Target Business Card Revolving Credit Account and Pay-In-Full Charge Account was accurate as of April 1 2006 and is subject to change. The Ohio civil rights commission administers compliance with the law. For some Target Business Card accounts Target may offer an alternate reward to the 10 Target Married applicants may apply for...
Show details

signNow's web-based application is specifically made to simplify the management of workflow and improve the whole process of competent document management. Use this step-by-step instruction to complete the Target business credit form promptly and with idEval accuracy.

How to fill out the Target business credit form on the web:

By making use of signNow's comprehensive solution, you're able to perform any needed edits to Target business credit form, make your customized digital signature in a couple of quick actions, and streamline your workflow without the need of leaving your browser.

Instructions and help about apply for target business credit card

Enjoyed the easy way to complete and eSign the target business credit card with signNow?

What makes a signed document legal?
Are you wondering if an eSigned paper imposes any obligations on the signee? Learn about the role of eSignature in making the document legal.
How to sign documents online
Know how to sign documents online fast and secure. Get all the advanced tools to create legally valid signatures and use them without leaving your browser.
Explore popular eSignature features: legally-binding signature
To deal with your document management smoothly,...
Signature verification: what is it and how to use it?
Find out why electronic signature verification is so important and learn how to do it with t...
Improve Your Google Experience: how to change an email signature in Google
To handle your document management smoothly, you...
Where do documents go after they’ve been signed?
Choose what you want to do with your signed documents. Download, archive, share or permanent...
Understanding Amended Tax Returns and Electronic Signatures
Learn everything there is to know about electronic s...
Improve Your Google Experience: how do I sign a document in Google Docs
To take care of your document management effortl...
Improve Your Google Experience: how to add signature on Google Docs on iPhone
Find All You Need to Know: PDF signature
To take care of your document management easily, you need to take advantage of PDF signature. Otherwise, you risk getting overloaded with paperwork. Finding a complex eSignature solution is vital for you and your organization. If you want expert document management that’s fast, reasonably priced, and secure, give signNow a try. signNow is easy-to-use, and you can start the process without a learning curve of any sort. The solution offers many functions for making eSignature workflows easier. Adding files from the cloud, bulk sending documents, or creating a multi-subscriber workflow is some of the functionality you can utilize. Want to get the most out of PDF signature? Save time. Printing and scanning, and the physical delivery of papers are quickly turning into things of the past. Now you can create, send, and eSign PDFs online in clicks. eSign on the go. Expand the abilities of your mobile phone and tablet with signNow. Set up the app and benefit from PDF signature from any place. Monitor documents. Be aware of changes taking place within your PDFs. Using the Audit Trail function, you can check the status of your templates and discover the time, email, and IP of those working with them. Integrate with your preferred apps. Implement your process into any third-party app and manage recurring processes from one tab. Connect your account to Gmail and sign attachments using the signNow add-on. Team up. Work together on your projects with colleagues. Build team folders, invite employees, and add more records to work on. There are lots of other solutions on the market that have PDF signature, but signNow gives you a comprehensive eSignature workflow. Digitally transform your organization with sophisticated signing assistance, bulk sending options, role-based signing orders, and even more.
Explore Your Digital Signature – Questions Answered: add digital signature to Google Doc
What file types can be uploaded?
signNow supports dozens of popular file formats and enables you to close deals and certify important documents even while on the go.
How eSignature helps Real Estate in 2020
Explore all the advantages and benefits of using electronic signatures in the Real Estate industry. Fasten and secure your deals with signNow eSignature.
Can I post signNow forms on my website?
Find out how to easily and securely collect data and signatures by posting signNow documents on websites, social media, blogs, or any other public platform.
Does signNow work offline?
Edit and sign documents on your mobile device even without an internet connection. All changes will be instantly saved when you're back online.
How many ways can a contract be signed?
Understand how eSignature prevails over other methods to sign documents. eSigning is not only about convenience, its about compliance, boosted turnover, enhanced performance and transparency.
Explore popular eSignature features: Microsoft eSign
To take care of your document management effortlessly, you need to take advantage of Microso...
Start Your eSignature Journey: W-9 form online signature
To deal with your document management effortlessly,...
Improve Your Google Experience: digital signature for Google
To take care of your document management smoothl...
Signature name
Signature name. Choose efficient and easy to use eSignature solution. Manage your documents in minutes with signNow. No downloading and installing. No watermarks. Start your free trial right now!

How to create an eSignature for the target commercial account

After that, your target net 30 account is ready. All you have to do is download it or send it via email. signNow makes signing easier and more convenient since it provides users with a number of extra features like Add Fields, Invite to Sign, Merge Documents, and so on. And due to its multi-platform nature, signNow works well on any gadget, PC or mobile phone, regardless of the operating system.

target business credit card applicationr has gained its worldwide popularity due to its number of useful features, extensions and integrations. For instance, browser extensions make it possible to keep all the tools you need a click away. With the collaboration between signNow and Chrome, easily find its extension in the Web Store and use it to design target business credit card right in your browser.

The guidelines below will help you create an signature for signing target business account application in Chrome:

Once you’ve finished signing your target net 30 account, decide what you want to do after that — save it or share the doc with other people. The signNow extension provides you with a range of features (merging PDFs, including several signers, and so on) for a better signing experience.

target business credit card applicationy businesses have already gone paperless, the majority of are sent through email. That goes for agreements and contracts, tax forms and almost any other document that requires a signature. The question arises ‘How can I design the target business credit card I received right from my Gmail without any third-party platforms? ’ The answer is simple — use the signNow Chrome extension.

Below are five simple steps to get your target business account application designed without leaving your Gmail account:

target business credit card applications and tablets are in fact a ready business alternative to desktop and laptop computers. You can take them everywhere and even use them while on the go as long as you have a stable connection to the internet. Therefore, the signNow web application is a must-have for completing and signing target business credit card on the go. In a matter of seconds, receive an electronic document with a legally-binding signature.

The whole procedure can take less than a minute. You can download the signed [Form] to your device or share it with other parties involved with a link or by email, as a result. Due to its multi-platform nature, signNow works on any device and any OS. Choose our signature tool and leave behind the old days with efficiency, affordability and security.

After it’s signed it’s up to you on how to export your target net 30 account: download it to your mobile device, upload it to the cloud or send it to another party via email. The signNow application is just as efficient and powerful as the online tool is. Connect to a reliable connection to the internet and begin completing documents with a legally-binding electronic signature in minutes.

In order to add an electronic signature to a target business account application, follow the step-by-step instructions below:

If you need to share the target net 30 account with other parties, it is possible to send the file by electronic mail. With signNow, you are able to design as many files in a day as you require at an affordable price. Begin automating your signature workflows today.

Related links to does target have business accounts

Get more for target net 30

Find out other target red card for business