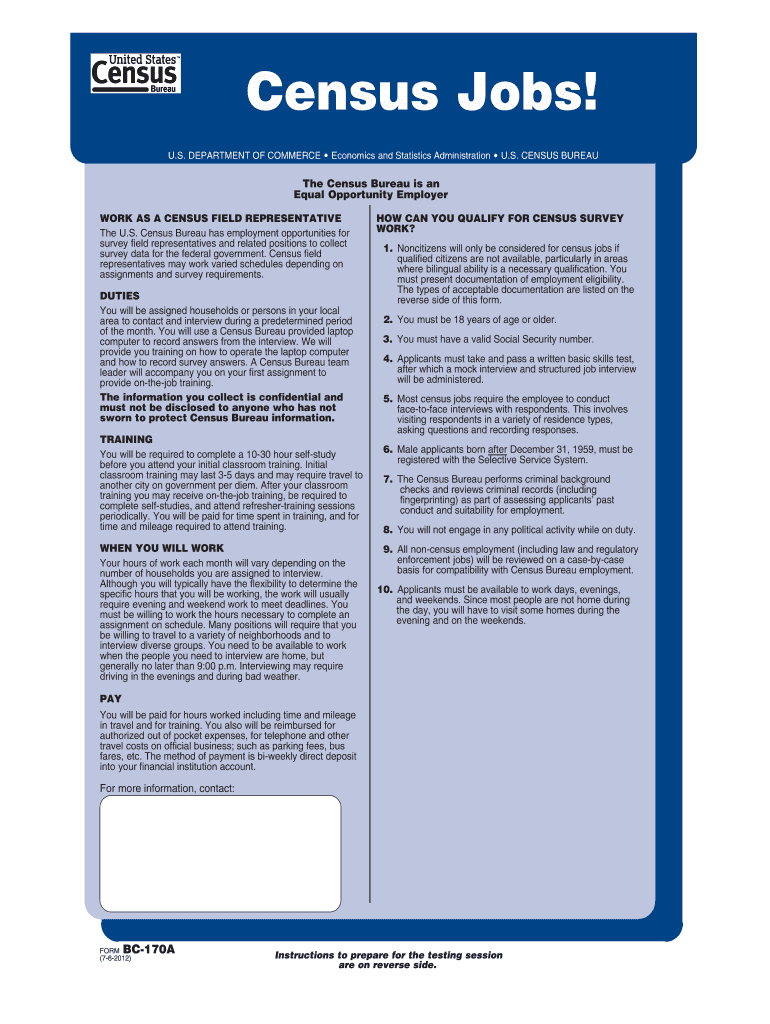 Use a bc 170 template to make your document workflow more streamlined.

Intersecting streets nearest your home 10-point compensable disability pref. less than 30 E-mail address Telephone number s Area code Number 10-point other pref. use when you are a spouse widow or mother of a disabled veteran c. Kind of discharge Mark X one box. Evening I certify that I am registered. Other phone A. Raw Scores Basic Skill Test D. Regional Office Mock Interview E. FIPS State F. FIPS County Structured Interview OFFICE B. The SSN has been used to keep records since 1943 when...
Show details

Rate the bc170 census

Quick guide on how to complete bc170

signNow's web-based DDD is specifically developed to simplify the arrangement of workflow and enhance the whole process of competent document management. Use this step-by-step guide to complete the BC-170A, Census Jobs form quickly and with excellent accuracy.

How to complete the BC-170A, Census Jobs form on the web:

By utilizing signNow's comprehensive service, you're able to execute any required edits to BC-170A, Census Jobs form, make your personalized electronic signature in a couple fast actions, and streamline your workflow without leaving your browser.

Video instructions and help with filling out and completing BC 170A, Census Jobs Form

Instructions and help about bc 172 census form

MUSIC Welcome to Be a Census Taker — 2020 Census Jobs. My name is Joni Crest well and Camp;#39’m with the U.S. Census Bureau. We&#39;rehiring thousands of people interested in making extra income while helping their community and supporting our monumental effort to get a complete and accurate count. Let&#39’s hear about the benefits. There are lots of benefits to working in the field. To start, the Census Bureau will hire you to work in your own community since you know it best. Census jobs will also have a flexible schedule. Some work happens days, evenings, and even weekends. If you&#39’re interested in making some extra income, jobs for the 2020 Census offer competitive wages, and they are paid weekly. Expenses, such as mileage, are reimbursed to employees doing fieldwork. Positions for the 2020 Census jobs are located throughout the United States and Puerto Rico. Explore our interactive map to find the pay rates in your county or municipal. Get more information

FAQs bc 170a census form

Related searches to bc 170a census employment inquiry

How to create an eSignature for the bc 170a

a b c 170for a one-size-fits-all solution to design bc 170? signNow combines ease of use, affordability and security in one online tool, all without forcing extra DDD on you. All you need is smooth internet connection and a device to work on.

Follow the step-by-step instructions below to design your bc 170 census:

After that, your us census for bc 171 is ready. All you have to do is download it or send it via email. signNow makes signing easier and more convenient since it provides users with a number of extra features like Invite to Sign, Merge Documents, Add Fields, and many others. And because of its multi-platform nature, signNow can be used on any device, desktop computer or smartphone, regardless of the operating system.

a b c 170s browser has gained its worldwide popularity due to its number of useful features, extensions and integrations. For instance, browser extensions make it possible to keep all the tools you need a click away. With the collaboration between signNow and Chrome, easily find its extension in the Web Store and use it to design bc 170 right in your browser.

The guidelines below will help you create an signature for signing bc 170 census in Chrome:

Once you’ve finished signing your us census for bc 171, decide what you wish to do next — save it or share the doc with other people. The signNow extension provides you with a selection of features (merging PDFs, including multiple signers, and many others) for a better signing experience.

a b c 170that many businesses have already gone paperless, the majority of are sent through email. That goes for agreements and contracts, tax forms and almost any other document that requires a signature. The question arises ‘How can I design the bc 170 I received right from my Gmail without any third-party platforms? ’ The answer is simple — use the signNow Chrome extension.

Below are five simple steps to get your bc 170 census designed without leaving your Gmail account:

The signNow extension was developed to help busy people like you to reduce the burden of putting your signature on legal forms. Begin signing us census for bc 171 by means of solution and become one of the numerous satisfied customers who’ve already experienced the key benefits of in-mail signing.

a b c 170ike smartphones and tablets are in fact a ready business alternative to desktop and laptop computers. You can take them everywhere and even use them while on the go as long as you have a stable connection to the internet. Therefore, the signNow web application is a must-have for completing and signing bc 170 on the go. In a matter of seconds, receive an electronic document with a legally-binding signature.

Get bc 170 census signed right from your smartphone using these six tips:

The whole procedure can take a few seconds. As a result, you can download the signed us census for bc 171 to your device or share it with other parties involved with a link or by email. Due to its universal nature, signNow is compatible with any device and any OS. Use our signature tool and say goodbye to the old times with security, affordability and efficiency.

a b c 170S device like an iPhone or iPad, easily create electronic signatures for signing a bc 170 in PDF format. signNow has paid close attention to iOS users and developed an application just for them. To find it, go to the App Store and type signNow in the search field.

After it’s signed it’s up to you on how to export your us census for bc 171: download it to your mobile device, upload it to the cloud or send it to another party via email. The signNow application is just as effective and powerful as the web app is. Get connected to a strong connection to the internet and start executing forms with a fully legitimate electronic signature in minutes.

a b c 170being very popular among mobile users, the market share of Android gadgets is much bigger. Therefore, signNow offers a separate application for mobiles working on Android. Easily find the app in the Play Market and install it for signing your bc 170.

In order to add an electronic signature to a bc 170 census, follow the step-by-step instructions below:

If you need to share the us census for bc 171 with other parties, you can send the file by electronic mail. With signNow, you are able to design as many papers in a day as you need at a reasonable price. Begin automating your signature workflows today.

Find out other bc 170 fillable form